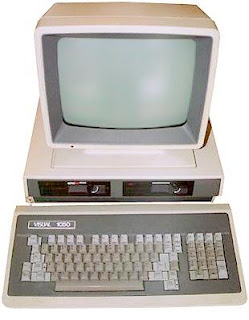 Ever wanted to own and operate a 30 year old personal computer?  Me neither!     The link above provides a customized emulation package, ready-to-run,  right out of the box. So now you have no excuse!

Through the portal of this digital representation, you'll be able to peer back into a time, before color consoles, when 60K (that's not a typo) of RAM was thought to be good, when booting from a 5 1/4" floppy disk was high technology, when eight little bits changed a lot of lives, and made some of us rich.


The link above supplies a digital replica of an actual Visual 1050 that sits on my desktop (serial number 486).  That's thanks to the ROM based emulation of the www.MeSs.org system. I still own and frequently run the original hardware, and have compared the look and feel of the MeSs emulator with the actual eight-bit microprocessor, and have to say the resemblance is uncanny.  This is the only emulator on the web that uses the programming inside the Visual 1050's own embedded chips. That means this virtual Visual 1050  runs the same speed as the hardware, and almost exactly replicates the graphical appearance of the console.  If fully exploits the 640 x 300 pixel graphic abilities of the Visual 1050's green-on-black monochrome display.

<------Real 5 1/4" Floppy Diskettes For Real Programmers!
The Visual 1050 came with a bundle of software; six diskettes full of useful utilities, source code, and applications.  Thanks to techie friends of mine, you will find here digital images of every 5 1/4" diskette that came with my own Visual 1050, when it was in mint condition! Collect all six.  They may be worth something when Ken Griffey Jr. is finally inducted into the Hall of Fame!

All The Documentation!  ------>
If you're reading this, it must mean you did something wrong.  And now you have to go back to 1984 and do it right, like in that movie 'Ground Hog Day' with Bill Murray.  If you're going to do it right, you must read these manuals.  You can, because they are all here thanks to other techie friends of mine!

The Visual 1050 really represents all top-of-the-line eight-bit microprocessors of that era.  So don't worry, the skills you gain here are easily transferable to 1980, and even before!

Let's assume you've already downloaded your new eight-bit microprocessor and unboxed it to the root of your C: drive (sorry version 1.0 is hard-coded there).  The first thing we need you to do is to swear allegiance to the operating system for which it stands.  Do you agree that CP/M Plus by Digital Research is the world's best eight-bit operating system?  Would you admit that CP/M Plus is as American as apple pie, Semper Fi, and Marty McFly?  Will you agree that the 4Mhz Zilog Z80 eight-bit chip is all anybody really needs to run an honest and profitable business?  Would you agree that the Visual Technology model 1050 was actually a better value than the IBM model 5150 (the first PC) when you consider the Visual 1050's banked memory system and it's bundle of software at no extra charge? Oh, and if you are in high school, do you agree to stop using your 6Mhz Zilog Z80 driven Texas Inststruments TI-83 Plus handheld calculator and, instead, start using your virtual Visual Technology 4Mhz Zilog Z80 driven, CP/M Plus enhanced, personal micro-computer for all your  college entrance exams, including  the PSAT, SAT, ACT, IB, and AT? If so, then you are hereby granted a non-gaming managers license to exploit the limitations of your virtual Visual 1050 Personal Computer for an unlimited amount of time for personal use, professional gain, or peer disdain.

Let's say you've downloaded the 226 MB package i've made available over at Kim DotCom's new webservice Mega. It'll unzip to a folder called 'Visual' with contents as shown in Figure 2 below.     I recommend starting with the QuickStart guide. It'll basically tell you to put the package so the path is C:\Visual, because it depends heavily on shortcuts that remain hard-coded until i figure out how links can be automatically updated when moving the link.  After that, be sure to move 'setvpath.bat' so the path is C:\setvpath.bat because this was the easiest way i could think of to coordinate all the paths in the system.  Once that's done,  you can start with the 'menus' or 'command' shortcuts.  The two .batch files are customizable, and are called from other .batch files inside the _1050 folder.   You can set some universal variables in 'vpath.bat', but you don't need to touch it for this demo. Be sure to leave 'vpath.bat' where it's at, but be sure to move 'setvpath.bat' to C:\setvpath.bat!

I don't know about you, but i believe the Visual 1050 has enough processing power to beat the game of roulette, making a college education completely unnecessary.  If you too believe that an eight-bit computer can make a college education completely unnecessary (like Bill Gates believed in 1975) then i invite you to come to Washington State where it's now legal to possess up to an ounce of marijuana...and light up.   I would also invite you to boot up your new virtual Visual 1050 using this nifty little .batch driven front-end i've devised to make it easy to go back to 1984 (unless you overshoot and go back to 1975).  It's not exactly a DeLorean, but in exactly four key-strokes,  it can put you on the command line of a new career that can go backwards as easily as it can go forwards.

Click on the 'menus' shortcut seen in Figure 2 above to pull up the main menu seen here in Figure 3a below:

This is a .batch driven (therefore customizable) front-end that makes it easy to use your new virtual Visual 1050. You'll see how i  deal with various combinations of virtual diskettes and virtual hard-disks.  I don't know who needs more than an A: and B: drive, but there's a C: drive available as well thanks to Rich Bramante and Wayne Warthen.

To get familiar with CP/M, let's select option #6 from the Main Menu (Figure 3a);
Original Bios 1.4:
The six diskettes on this menu came bundled with the original Visual 1050, and are all in virgin condition, as they arrived from the manufacturer (Visual Technology).  BIOS version 1.4 was the last/latest developed in support of the actual firmware, and supported the 'Winchester' external hard-drive.

At this point you are four keystrokes away from booting back to future.   I'll give you the sequence now, to boot CPMPLUS1 (option #1):

How hard was that?  This four-keystroke sequence get's you through the following two informational splash screens (Figures 4 & 5), and gives you the default boot screen in Figure 6:

Software Manuals For Visual 1050...All